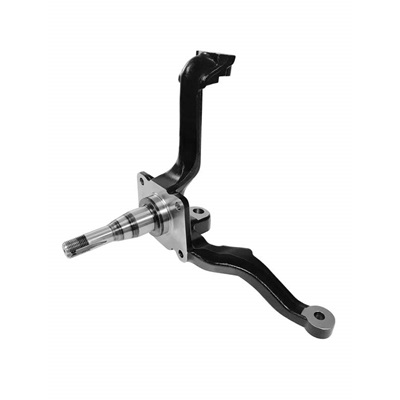 These spindles were obsoleted long ago by Ford and have become increasingly expensive and extremely difficult to find and now Scott Drake has the answer. Our Engineering team started with a set of used, but excellent condition, Ford originals, to create 3D scans which were then used for CAD modeling and then double checked against original Ford blueprints. No corners were cut on this critical component – they were constructed from FORGED ASTM 5140 grade steel, then we applied a protective, black e-coating and then all mounting surfaces were precision machined. We took special care to ensure bearing tolerances were identical to Ford’s. For an extra measure of safety and durability, the entire spindle is heat treated and the bearing surface is treated with additional induction hardening. All Drake spindles are 100% Magnetic Particle Tested as well. These spindles also fit a wide variety 1960s Ford and Mercury cars.