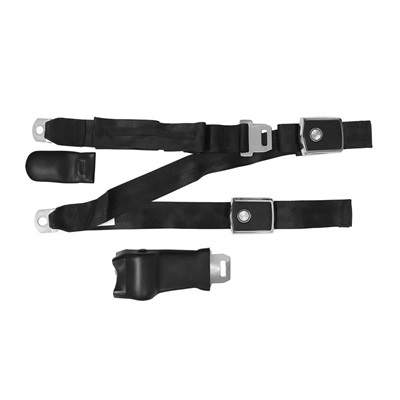 These premium quality retractable shoulder and lap seat belts are reproductions of the Deluxe belts originally equipped in the front seats of many 1968-69 Ford and Mercury cars. They feature Scott Drake exclusive buckles that are authentic in appearance with correct textures, chrome bezels and markings. Sold individually. Made in the USA and tested to modern safety standards. Kit is for 1 seat, mounting hardware not included.

Note: Ford offered more than one size cover on the belt retractor. This is the more common low-profile version. Also, many early 1968s has two completely separate buckles, with later cars having a simpler “Y” anchor on the inboard side with 2 buckles. For early 1968 cars you will need to order both Retractable Lap Belt (P/N: SB-BK-68-C) & Shoulder Belt (P/N: SB-BK-68-C-S).