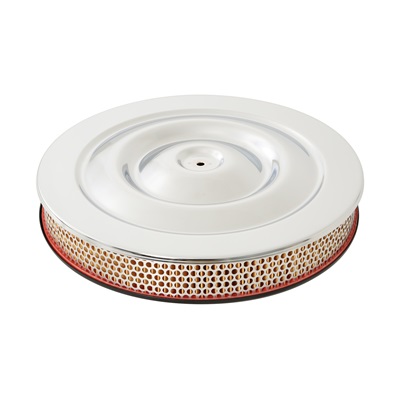 Scott Drake is proud to announce the release of new reproduction ?Double Hump? HiPo Air Cleaner Assemblies. These authentic units are modeled after the extremely rare 14? air cleaners that were standard on 260s and early HiPo 289s found in 1964-1/2 ? 1965 Mustang, 1963 - 1965 Ford Falcon, 1963 - 1964 Shelby Cobra, 1963 - 1965 Ford Fairlane, and 1963 - 1965 Falcon Sprint. Unlike other HiPo air cleaner assemblies, these feature a unique ?Double Hump? chrome lid rather than the more common ?flat top? lid used on later model HiPo engines. The lid also has two indents to lock the wing-nut in place securely. The base of the assembly omits the breather port and is finished in a semi-gloss black like the originals. Attention was paid to the filter as well to match the original design with a yellow filter element, a round hole perforated screen and orange gasket material to complete the authentic appearance. Make your restoration or clone stand out from the crowd with this premium quality reproduction of the highly sought after ?double hump? air cleaner. Like all Scott Drake products, these are backed by the Scott Drake Satisfaction Guarantee.